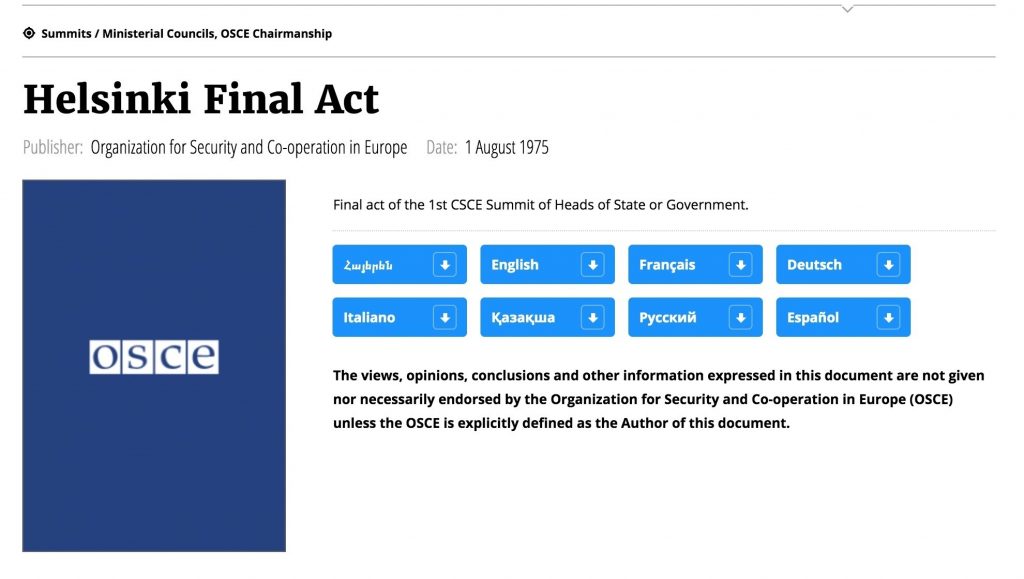 Article VII of the Helsinki Final Act of 1975, the initiating document for the Organization for Security and Cooperation in Europe, provides for freedom of thought, conscience, religion or belief. It is the human right most specifically called out in Article VII’s broader call to respect human rights.

Article VII – Respect for human rights and fundamental freedoms, including the freedom of thought, conscience, religion or belief.

The participating States will respect human rights and fundamental freedoms, including the freedom of thought, conscience, religion or belief, for all without distinction as to race, sex, language or religion.

They will promote and encourage the effective exercise of civil, political, economic, social, cultural and other rights and freedoms all of which derive from the inherent dignity of the human person and are essential for his free and full development.

Within this framework the participating States will recognize and respect the freedom of the individual to profess and practice, alone or in community with others, religion or belief acting in accordance with the dictates of his own conscience.

The participating States on whose territory national minorities exist will respect the right of persons belonging to such minorities to equality before the law, will afford them the full opportunity for the actual enjoyment of human rights and fundamental freedoms and will, in this manner, protect their legitimate interests in this sphere.

The participating States recognize the universal significance of human rights and fundamental freedoms, respect for which is an essential factor for the peace, justice and well-being necessary to ensure the development of friendly relations and co-operation among themselves as among all States.

They will constantly respect these rights and freedoms in their mutual relations and will endeavour jointly and separately, including in co-operation with the United Nations, to promote universal and effective respect for them.

They confirm the right of the individual to know and act upon his rights and duties in this field.

In the field of human rights and fundamental freedoms, the participating States will act in conformity with the purposes and principles of the Charter of the United Nations and with the Universal Declaration of Human Rights. They will also fulfil their obligations as set forth in the international declarations and agreements in this field, including inter alia the International Covenants on Human Rights, by which they may be bound.